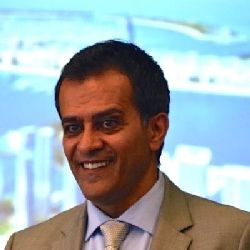 Since 1991, Ali held Boeing positions in Airplane Systems, Airplane Commercial Sales and Marketing, Customer Engineering, Operations, Structures Engineering, and Customer Service. Ali represented Boeing in several countries including South Korea, England, and Italy. He traveled internationally on business and worked closely with various airline customers. While working on his undergraduate and graduate degrees in Mechanical Engineering from the University of Alabama and Georgia Tech, he held several jobs including an internship role at GM. He is currently completing his Doctorate degree in Organizational Management. Ali taught Boeing Leadership courses such as Communicating across Cultures, Customer Service Excellence, and Setting and Achieving Goals. He also served as the President of the Boeing Tae Kwon Do club for several years. Ali was born in Beirut, Lebanon and enjoys learning languages and playing music. Airline Customers and Boeing have given him numerous awards, such as the 2003 Diversity Excellence award, the 2004, 2010, and 2011 Global Diversity Change Agent awards, and was among the top 100 managers at Boeing Commercial Airplanes that had the highest employee satisfaction scores in 2010.