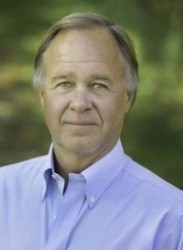 Winthrop H. Smith, Jr. is the former Executive Vice President of Merrill Lynch & Co. and Chairman of Merrill Lynch International, Inc. He spent twenty-eight years at Merrill Lynch beginning in 1974 after receiving an MBA from Wharton Graduate and retiring in January 2002. He is a 1971 graduate of Amherst College. He began as an investment banking associate and for the last ten years of his career was responsible for Merrill Lynch’s growth outside of the United States. He was known as a charismatic leader, a strategic thinker and an excellent client relationship professional who developed strong relationships with Government leaders, corporate executives and high net worth individuals around the world.

“Catching Lightning in a Bottle, The Merrill Lynch Story” – the first complete history of Merrill Lynch – traces ML’s impact on the world of finance from the day Charlie Merrill opened his one-man shop on January 6, 1914, to the final shareholder meeting prior to its acquisition by Bank of America on December 5, 2008. Win Smith also weaves in his personal experiences and observations. As the son of a founding partner, the author has known every Merrill Lynch CEO from the first, Charlie Merrill, to the last, John Thain. While it details the drastic decline of the company between 2001 and 2008, it also explores the story of the company’s “Mother Merrill” tradition – the vision and guiding principles shared by employees with each other and with their clients throughout the world.